Let’s look at several techniques in machine learning and the math topics that are used in the process.

In linear regression, we try to find the best fit line or hyperplane for a given set of data points.  We model the output of our linear function by a linear combination of the input variables using a set of parameters as weights.

In the above process, we used derivatives, the second derivative test, and the Hessian, which are notions from multi variable calculus.  We can also find the solution to our minimization problem using linear algebra.

We assume that the conditional distribution of X given Y=k is the multivariate Gaussian distribution N(μk,Σ), where μk is a class-specific mean vector and Σ is the covariance of X.  So fk(x) can be rewritten in terms of μk and Σ.

Now, we find estimates for πk, μk, and Σ, and hence for  pk(x).  We classify x according to the class k for which the estimated pk(x) is greatest.

The log-likelihood function L(β) is a real-valued function of β=( β0, β1,…, βp).  So L is a function from Rp+1 to R.  Further, L is twice continuously differentiable.  So we can apply the multivariate Newton-Raphson method.

Next, we’ll look at a method that can be used to solve both regression and classification problems.  In artificial neural networks, we use compositions of linear and nonlinear functions to model our output functions.

The output functions can be represented by a neural network diagram. 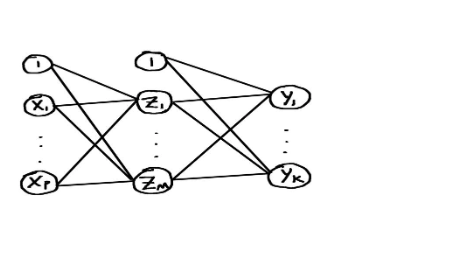 In artificial neural networks, the notion of likelihood function from probability theory is used in the case of classification problems.  Gradient descent, from multivariable calculus, is used to minimize the error function.  During backpropagation, the multivariable chain rule is used.

Let’s look at the method of support vector machines for solving classification problems.  The idea is that we have a bunch of data points, say of two classes, and we want to separate them with a decision boundary.  For instance, the data points might be easily separated by a line like this: 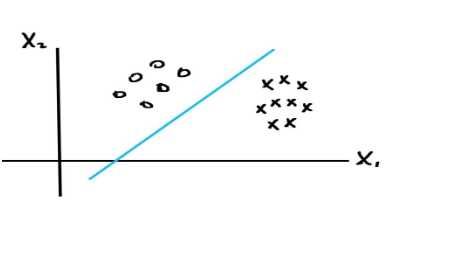 If the data points can be easily separated using a line or hyperplane, we find the separating hyperplane that is as far as possible from the points so that there is a large margin.  This requires maximizing the margin, and it ends up being a convex optimization problem.  To solve this convex optimization problem, we use Lagrange multipliers, a notion from multivariable calculus.  Once we find the maximal margin hyperplane, we can classify new points depending on which side of the hyperplane the point lies on.  This method of classifying points is called the maximal margin classifier.

If the data points are not separable by a hyperplane, we can still try to find a hyperplane that separates most of the points but that may have some points that lie inside the margin or lie on the wrong side of the hyperplane.  The situation may look like this: 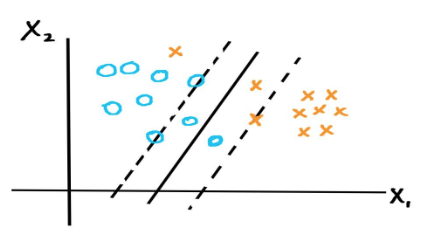 Just as in the case of the maximal margin classifier, we want to maximize the margin so that points on the correct side of the hyperplane are as far as possible from the hyperplane.

Not only do we want to maximize the margin, we also want to minimize the violations of the margin.  This problem turns out to be a convex optimization problem, and it is solved using Lagrange multipliers. 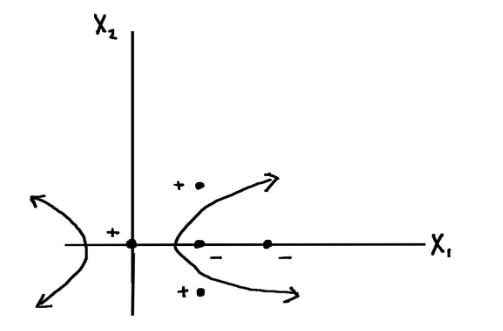 In the process of solving the convex optimization problem for the soft margin classifier, a dot product occurs; in the method of support vector machines, we replace the dot product by something called a kernel.  A kernel is essentially a function that can be represented as the inner product of the images of the input values under some transformation h.  This replacement of the dot product with a kernel is called the kernel trick.

The kernel K should be a valid kernel; that is, there should be a feature space mapping h that corresponds to K.  By Mercer’s theorem, it’s sufficient that K be symmetric positive semidefinite.

In the method of support vector machines, we see that the notions of dot product and symmetric positive semidefiniteness are used; these notions are from linear algebra.  To solve the convex optimization problem, Lagrange multipliers is used; this notion is from multivariable calculus.

In this article, we have looked at the mathematics behind the machine learning techniques linear regression, linear discriminant analysis, logistic regression, artificial neural networks, and support vector machines.

For more details about the math behind machine learning, visit: Math for Machine Learning Book

Note: This is a guest post, and opinion in this article is of the guest writer. If you have any issues with any of the articles posted at www.marktechpost.com please contact at [email protected]

Latest Research Explores The Machine Learning Algorithm For Forecasting Population Changes And It Is...

This Article Is Based On The Research 'Unifying structural...

This Article Is Based On The Research Article ...

Context and references drive interaction between people. For example,...